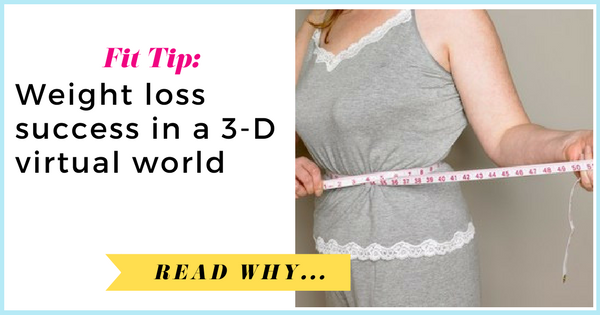 Participants in two weight-loss programs — one involving traditional health club sessions and the other delivered online in a 3D virtual world — lost similar amounts of weight and body fat, but the online contingent reported significantly greater gains in behaviors that could help them live healthier and leaner lives.

More and more people have been turning to online weight-loss programs, but Johnston said the programs often lack important elements of human interaction. The IU researchers wanted to travel even farther into cyber space by evaluating a weight-loss program offered in a virtual-reality environment, where visitors use avatars to interact with others or the computer-simulated environment — in this case, a simulated fitness club.

“The virtual world program was at least as beneficial as the face-to-face program and in some ways, more effective,” Johnston said. “It has the potential to reach people who normally wouldn’t go to a gym or join a program because of limitations, such as time or discomfort with a fitness center environment.”

The findings in the study “Comparison of a Face-to-Face versus Virtual World Weight Loss Program” will be discussed on Friday at the American College of Sports Medicine annual meeting in Denver. They will be presented during a poster presentation in Hall B from 8-9:30 a.m. MDT.

For 12 weeks, members of the each weight-loss program spent at least four hours a week attending meetings at a virtual or real club. In both they learned about nutrition, physical activity, changing habits and how to benefit from social supports. The study involved overweight and obese people — mostly women. The average age of the face-to-face group was 37. The average age of the virtual world group, which provided training in how to use the Web-based platform Second Life, http://secondlife.com/, was 46.

The participants in each group lost a comparable amount of weight — on average almost 10 pounds — and saw similar decreases in body mass index and body fat. The big differences between the two groups involved behaviors. Participants in the face-to-face group reported no significant changes in any of the behaviors evaluated — actions involving healthy eating, physical activity and sleeping habits. The virtual world participants reported positive changes in all the healthy eating and physical activity measures except the number of hours slept.

“They also had more confidence in their ability to perform physical activity in difficult situations, such as bad weather, vacations, low-energy days,” Johnston said.

In collaboration with Celeste De Vaneaux, creative director and CEO of Club One Island, the study was conducted by Johnston, Anne P. Massey, Kelley School of Business, and Victoria S. Lee, a graduate student in kinesiology in the School of Health, Physical Education and Recreation.