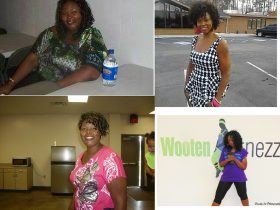 I Lost 125 Pounds: Metisia Shed The Weigh And Got Her Life Back

I noticed issues with my weight at an early age of around 10 mostly from emotional eating. However, once I got into high school I began eating better and working out and the weight came off to the point where I was at one point a size 6 in jeans. But, I never really addressed the reasons why I was an emotional eater so when I got into college I gained several Freshman 15’s and that’s where the yo-yo back and forth between losing and gaining the weight really began.

HOW DID YOUR WEIGHT AFFECT ANY ASPECT(S) OF YOUR LIFE?  I found that it mostly affected my self esteem because if I didn’t feel 100 percent in how I looked it affected my mood which of course then led to more emotional eating and more weight gain. I knew it was an issue once I began to feel depressive and most of my clothes became uncomfortable to wear. Also, because I have asthma and epilepsy the constant back and forth in my weight did not help in controlling either condition properly.

WHAT WAS THE “TURNING POINT” THAT GOT YOU STARTED ON YOUR WEIGHT LOSS JOURNEY?  Last August, I took a picture of myself in the mirror in a sports bra and underwear and had an honest moment with myself on how much weight I had actually gained. I was at my highest weight that I know of because I refused to weigh myself in college. From that point I decided enough was enough and I was going to find a plan that worked for me in order to assist in getting the weight off because I wasn’t okay with what I saw in the mirror that day.

HOW DID YOU GET STARTED?  I began slowly using a program that helped me get on track in regards to the basics of making sure I was eating the correct foods and working out at least 5 times a week but I wasn’t actually seeing the changes I wanted to see so I quit the program. I began to really see a noticeable difference when I began to put my own HIIT, high intensity interval training, workouts together and really focused on making sure I was eating properly as well. I also utilized my M.A. in Psychology to assist myself in exploring why I was an emotional eater and why I had gained so much weight so I could avoid gaining it back.

HOW LONG AFTER YOU STARTED DID YOU BEGIN TO SEE RESULTS OF YOUR WEIGHT LOSS EFFORTS?  I began to see minor results a few months after starting in August 2015 but the biggest changes in my journey were noticeable from January of this year to the present. When I look at my before picture and pictures I’ve taken this month it is such an amazing difference and even though it’s only 18 lbs. on the scale because of the inches I’ve lost and the muscle I’ve gained it looks like much more.

WHAT WAS THE HARDEST PART?  During this process I have had to overcome not always having the funds to eat exactly how I wanted to which has resulted in some interesting but still healthy work arounds. I also had some issues with my asthma flaring up during pollen season that caused some kinks in working out properly as I was having to use my inhaler everyday and night which is a lot more than usual. Before I began working out seriously again in August 2015 I was just coming off of a period of serious issues with my epilepsy that had completely derailed my last weight loss attempts but luckily I have gotten that under control this time around.

DID YOU EVER WANT TO GIVE UP? WHAT KEPT YOU GOING?  I have had my moments where I wondered if it was worth going forward, mostly in the beginning when I wasn’t seeing the changes that I have now. However, I know now that if I had quit when I wanted to then I wouldn’t be where I am now so there’s no way I’m going to quit now because the sky is the limit!

DID YOU HIT ANY WEIGHT LOSS PLATEAUS? HOW DID YOU OVERCOME THEM?  I hit a plateau right after the holiday season and I was stuck going back and forth between 175 lbs and 179 lbs for a month or two. To break out of the plateau I changed what I was eating to tweak my protein intake and I also added additional cardio into my workouts as well as an additional day during the week that I workout. Now, I workout Sunday-Friday and take Saturday off as a rest day as well as a cheat day. Sunday’s and Wednesdays are usually my cardio days and the rest are strictly HIIT workouts that I put together myself. I find that Saturday’s are great because the cheat day not only allows me to indulge so I don’t fall of the wagon but it also is somewhat of a reset so I don’t find myself in another plateau.

HOW LONG DID IT TAKE YOU TO LOSE MOST OF THE WEIGHT?  It has taken me nearly a year to get to where I am and I’m not at my goal weight yet. I started in August of last year so it’s been about 11 months. My goal is 145 so I’m not far off from my goal weight!

DID YOU HAVE ANY NON-SCALE VICTORIES?  I have had a lot of clothing related non-scale victories since half of my clothes didn’t fit me anymore. I’ve gotten comfortable wearing shorts again, my favorite bikini fits me in a way now that I would consider wearing it out and not just in progress pictures for instagram. I had a coat that I bought that was a little tight when purchased that fits me great now. Also, I’m a lot stronger than I was before and that’s a big one for me beyond the number on the scale.

WHAT DOES YOUR DAILY DIET LOOK LIKE COMPARED TO WHEN YOU WERE HEAVIER?  I used to literally wake up and eat ravioli for breakfast sometimes. And not just one serving, several. I was not opposed to eating an entire frozen pizza by myself and then lying about it either. Now, I know not to drown my feelings in food and instead to address why I’m feeling the way I am and talk it out with myself. I have protein with every meal in the form of eggs, tuna, or chicken. I never ate red meat so I still avoid that now. I also make sure my vegetable intake is on a great level but I found that fruit can be somewhat of a sugar trap for me so I don’t eat that as much as I used to. A good example of what I may eat in a day would be scrambled eggs with turkey, chickpeas, and green onions for breakfast, a protein cookie for a snack, tuna lettuce wraps for lunch, and shredded chicken with vegetables for dinner.

HOW DOES YOUR PHYSICAL ACTIVITY COMPARE TO WHEN YOU WERE HEAVIER?  I was very sedentary and inactive before I started up again in August because of my health issues but now I workout days a week for at least 20 mins a day. I can do a burpee now which was not possible at first I can actually do several rounds of burpees. I can do a push-up without being on my knees which is amazing as well. I try to incorporate moves into my workouts that will increase my heart rate and breathing along with strength training. I definitely love working out more now than I did before!