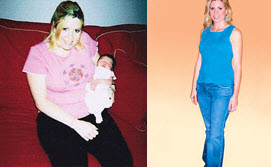 When even the size 18 jeans became a tight squeeze, Kristi Dear knew she needed to take action. After cutting down portion sizes and squeezing regular exercise into her weekly routine, she lost 75 pounds — and even became a personal trainer!

“I Did It!”
Name: Kristi Dear
Age: 29
Height: 5’4″
Her Weight Before: 200
Her Weight After: 125
Pounds Lost: 75
At Current Weight: 3 years
Kristi Dear was never a fan of exercise, but when she hit 200 pounds, she knew she had to become one. “I’d lay out my workout clothes the night before and force myself to put them on as soon as I got up,” says the Savannah, Texas, mother of two. “Then I’d turn on a fitness TV show. Watching those happy, healthy people made it easier to join in.”
After a few weeks, she began taking classes at a gym. “I blocked out an hour in the morning on my calendar five days a week so nothing would interfere,” she says.

RELATED:   Real Weight Loss Success Stories: I Got My Energy Back After Losing 30 Pounds

Dressing-Room Meltdown
Despite being sedentary, Kristi was a trim 110 pounds until she went to college. “I started eating the way my boyfriend — now husband — did: Buffalo wings, tacos, anything greasy,” she says. By age 20, she was up to 150 pounds; by 24, after having two babies, she weighed 200. One day Kristi tried to buy a pair of jeans. “When I couldn’t get a size 18 over my hips, I started to cry and then vowed to change,” she says.

Dieting Without Deprivation
Along with adding exercise, Kristi cut back on portions. “I’d make a turkey sandwich for lunch but eat just half, along with raw vegetables and a few pretzels. I saved the rest for an afternoon snack instead of chips,” she says. “I never felt like I was on a diet.” Within a month, she had dropped eight pounds; she reached 125 in about a year.
Kristi’s gym enthusiasm has led her to become a personal trainer, and now she makes kids’ exercise videos. “If I can’t get to the gym, I’ll do squats while I dry my hair, dance with my kids. My body craves movement every day.”

RELATED:   How I Lost Weight: Busola Lost 60 Pounds In Only 7 Months!

Kristi’s Weight-Loss Plan
The Diet: Breakfast is whole-grain cereal with soy milk. At lunch, Kristi has turkey and low-fat cheese on whole wheat with carrot sticks. Dinner is salmon, whole-grain rice, and broccoli. She snacks on apples, bananas, green beans, and half an avocado.
The Workout: Sixty to 90 minutes of strength or interval training three times a week; 45 minutes of cardio (swimming, kickboxing, basketball) twice a week.
Biggest Temptation: Pepperoni pizza. “I fill up with salad first; then I’m satisfied with just two slices.”
What She Couldn’t Wait to Wear: Tank tops. “I always wore long sleeves in the summer to cover up my flab. Now I love to show off my shoulders and upper arms.”