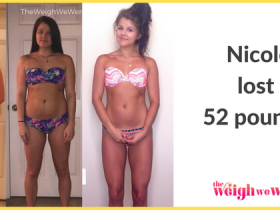 Weight Loss Before and After: Nicole Lost 52 Pounds After Pregnancy

The Setback
After I began a gig as a medical sales rep in 2003, I was on the road 4 or 5 days a week. My clients and colleagues usually wanted to have dinner out, so we ate a lot of food at Chinese and Mexican restaurants. And we usually drank a lot, too. I was never a slim guy, but now I was expanding: The scrubs I wore for work grew bigger, and climbing in and out of cars hurt my knees. My job was becoming too physically exhausting. I mean, this was embarrassing–overweight in the health-care industry!

The Wake-Up Call
My uncle died of a heart attack in 2009 at age 71. He was a jolly, hefty, lovable guy who also worked in surgical sales. At his funeral, everyone kept telling me how much alike we looked–and they were right. There were so many similarities between us that I couldn’t ignore anymore: the job, the heavy drinking, the overeating. My uncle was a great guy, but I didn’t want to share his fate.

The Food
A large portion of my social and professional life revolved around entertaining and food, and I was afraid of sacrificing that. But it was easier to change than I thought: I just drink a protein shake before I meet anyone at a restaurant, and then I order a small meal. Instead of drinking half a bottle of wine every night, I drink only a few glasses on weekends. Eventually I transitioned into a larger change: Now I eat five to six small meals throughout the day, rather than three big ones, and that keeps me energized and never too hungry. I love snacking on apples and peanut butter, and typically cook up a salmon salad at home. The key is sane portion sizes: I never overeat.

Stir Up a Protein Shake
Shakes help you reload after the gym or fill up before a meal, but you can’t whip them up on the go. Nutritionist Alan Aragon has your fix.

Mix 1 cup Greek yogurt, 1 scoop whey protein powder, a handful of berries, and 3 or 4 nuts in a bowl. It’s as nutritious as a blender shake, with less cleanup.

The Fitness
No matter where I am, I start the morning with a 30-minute treadmill run. On the road? No problem: Before I book a hotel, I make sure it has a gym. I do conventional exercises, like squats, pushups, and bench presses. The hanging situp (where I hang from a bar and curl my body up) has become my favorite core exercise.

The Reward
Last year, a beautiful ex-girlfriend of mine became single again. In my heavier days, I might not have acted on the news. But now I was more confident. She moved in at the beginning of this year, and we’ve gone ring shopping together. I’m really excited about the future.