A Reality TV Show Inspired Her to Lose Pounds 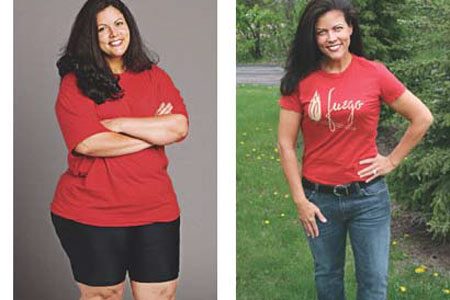 Getting voted off The Biggest Loser motivated Jennifer Eisenbarth to hit the gym and lose weight fast .

The Buildup: Hitting 220 pounds as a teenager didn’t quash the performer in Jennifer Eisenbarth, whose self-confidence won her several leadership pageants. But at 31, after her first pregnancy, she hit an all-time high of 283 pounds. With her family history of obesity, she knew she had to get a handle on her weight while her daughter was young or she would never break the cycle. But she got pregnant again, and was still hovering at 245 two months after her second daughter was born.

The Breaking Point: In November 2005, The Biggest Loser called for auditions, and Eisenbarth’s competitive streak was piqued. “I announced, ‘I can totally do that!'” she says. When her mother-in-law agreed to baby-sit if she made it onto the show, “I had run out of excuses,” Eisenbarth says.

RELATED:   Before And After: Avis Lost An Amazing 151 Pounds!

The Changes: After four months of auditions, she was chosen from thousands to be one of 14 cast members. She flew to The Biggest Loser weight-loss ranch nearL.A., where she learned to eat only until she was satisfied, not stuffed. She replaced three meals a day with smaller portions of healthy foods—vegetables, whole grains, fruit, nuts—every 2 to 3 hours. But one week in (and already 8 pounds lighter), Eisenbarth was voted off the show. “At first I was devastated,” she says. “But looking back, I realize that was the best thing that could have happened.” She was still in the running for the $100,000 consolation prize, so, using a gym membership provided by the show, she started walking on a treadmill or using an elliptical trainer for 30 to 45 minutes a day. Six months later, she added free weights six times a week. “Once I started lifting weights, I went from a size 14 to a size 6 in 11 weeks,” she says. “I only wish I had started it earlier!”

The Reward: By the show’s finale in December 2006, she had dropped 100 pounds. “Even though I wasn’t the winner…seeing three-digit weight loss was spectacular,” she says. And she’s a role model for her kids. “By eating right and being active, I show them that I love and respect myself and plan to be with them for a long, long time.”

Buy (and cook) in bulk. “Buy large portions of skinless chicken or shrimp and cook them ahead so you’ll always have the makings of a healthy meal.”

You can do more than you think. “When you think you’ve reached your exercise limit, challenge yourself by going a level higher. Instead of walking for 10 minutes, do 15.”

Forget perfection. “When losing weight, you don’t have to be perfect—just be consistent.” 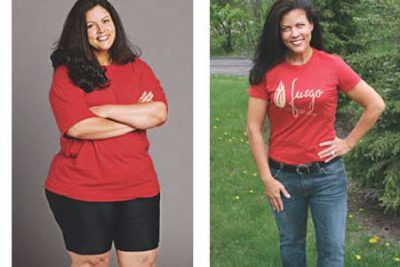 Related Items100 Pounds Lost
← Previous Story She Trimmed Her Portions and Lost 24 Pounds in a Month
Next Story → My 56 Pound Weight Loss Journey with PCOS: From Struggle to Success