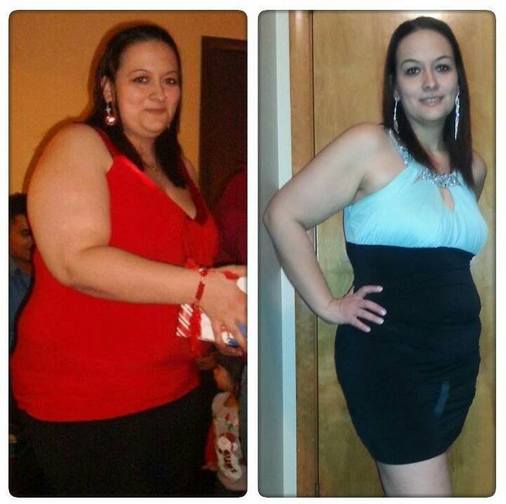 My name is Christina. I am happily married to my wonderful husband and I have three kids. I wasn’t always happy though. I was previously married to my ex husband for 8 years. He physically, verbally and sexually abused me for all of those 8 years. However, I couldn’t leave him for fear and because my kids “needed their father”. My weight was never an issue for me as a child or adolescent or even a young adult; that is until I got pregnant at 18. I didn’t work, so more of a reason to eat out of boredom. That’s when the abuse started. He would call me a whale, say how embarrassed he was of me and just beat me whenever and however he wanted. This obviously made me depressed and I would just eat more and more.

Toward the end of our relationship I had been going to the gym 5 days a week, 1-2 hours a day, and had lost about 40 pounds in a 3 month time. But it wasn’t something I chose to do. He was forcing me to go. He would weigh me, yes WEIGH ME, every week to make sure that I didn’t go up! And the last weigh in, he decided to wake me up at 2am to do. My weight had stalled and I had gained from the previous weigh in. He pulled my hair and shook my head like a rag doll back and forth, side to side. I HAD FINALLY HAD ENOUGH!

I left that man so fast he didn’t know what hit him. He did locate me eventually and tried kidnapping me and taking me to Mexico (I had a restraining order on him). Well guess what this girl did? This scared little girl waited for him to pull up to a rest stop and fall asleep. Then I grabbed my two kids, slid out the back door ( I was sitting in the back with my kids on purpose) and ran like hell to the nearest truck driver! The cops and Rangers were called and were there within minutes. Yes, I finally got justice and put him in jail.

RELATED:   Male Weight Loss Success Story: I Dropped 53 Pounds Together With My Family

Now, I’m re-married, and my husband and I have a daughter together aside from my two kids. He is absolutely wonderful. He has given me a new outlook on life and I couldn’t be happier. We’ve been together for almost 6 years now and he’s never once laid a hand on me.

Unfortunately with all the abuse I’ve suffered, that wasn’t enough of a wake up call that I had to change for myself and try to get healthier. My wake up call came at a later date. It came in June of last year. My husband and I were at a car dealership looking at a car in their lot. We were taking turns watching my 2 year old because we were near a busy road. For one second we lost track of her and before I could realize it, she was feet from the road. She’s a toddler and you know that if you run after them, they run even faster (thinking it’s a game). I just knew that at over 250 lbs I would not make it in time. So I quickly told my husband. He started running after her. She started running towards the traffic. THANK GOD he made it in time!!! But “What would I have done, if I were alone?”

I finally decided that it was time to change. No more excuses. It was time for ME!

Someone had told me about an app for calorie counting. I downloaded it, but never used it much. Calorie counting was tedious and boring, until I joined that same program online. I made friends on there that were in the same boat I was in! Every time I felt like I wasn’t seeing progress, or when I wanted to quit, they were there to cheer me on and tell me that “I could!”

In less than 2 years, I have dropped over 70 pounds and 20+” total from my waist, hips, arms and neck. I still enjoy most of the foods I ate before, but with moderation. I workout at least 4 to 6 times a week, anywhere from 25mns to an hour and 30mns. I’ve done Insanity, Zumba, T25, Leslie Sansone, the treadmill and elliptical and just plain walking/jogging outside. The point is that you’re moving!

I want to let everyone out there know that it is possible. I am living proof. It does take hard work, determination and perseverance to succeed. I leave you with a picture of my before and current. I still have around 40 pounds to lose and then I will have an AFTER picture.

Related Items70 Pounds LostjoggingOver 70 Pounds LostrunningSEOtreadmillwalkingzumba
← Previous Story Namita’s Story
Next Story → Weight Loss Before and After: I Got On The Road To Fitness And Dropped 25 Pounds