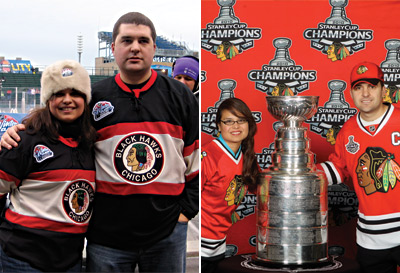 This Chicago couple wanted to get healthy, so they took up running, stopped eating out, and started cooking

Todd Petrich, a CPA from Seattle, had always been trim until a few years ago when he moved to Chicago, a city known for hot dogs and deep-dish pizza. He lives in the Windy City with his wife, Aracely, an attorney whose busy schedule continues to challenge her waistline. She used to work as a trial lawyer, fasting all day and binging at night. Now she works for a nonprofit organization that requires her to travel regularly and take clients out to dinner. Last summer, Todd decided he wanted to look and feel healthier, so he changed his eating and exercise habits—and Aracely agreed she would, too. Since then they’ve lost a total of 68 pounds.

Todd’s clothes stopped fitting in June; he had two options: shop for a new suit or lose weight. Not wanting to invest in a new wardrobe or commit to a future of weighing 220 pounds, he chose to slim down. With her husband as the driving force behind this effort to improve his health, Aracely went along for the ride and, in the process, lost weight, too.

Try these Healthy Foods Everyone Should Eat

The Petrichs read The Runner’s Handbook and The Complete Book of Running and settled on a walk/run program to build their endurance. “That first time we ran was so demoralizing. I couldn’t run for a whole minute,” Aracely says. They worked their way up to 30-minute workouts, three times a week, and managed to run 20 of those minutes without stopping.

They also worked with a dietitian to improve their eating habits. They stopped skipping breakfast during the week and learned to pick meals that contain a healthy balance of fat, protein, and carbs. They scaled back the number of times they eat at restaurants; now when they dine out, they skip the appetizers and dessert, split a steak, and order several vegetable sides. If they want different dishes, they order separate entrées and take half to go.

Fewer restaurant meals means more time in the kitchen—together. The couple has a newfound love for cooking and experimenting with new cuisines and seasonal foods. They also adopted a tactic to survive their beloved pastime: professional sporting events. Instead of raiding the concession stands at the United Center, they try to smuggle in healthy snacks, such as nuts. “We’re season ticket holders to the White Sox and Blackhawks,” Todd says.

RELATED:   Weight Loss Before and After: Lisa Drop 1.5 Pounds Even After Getting Off Track

Aracely and Todd keep each other honest. He used to email his wife multiple times a day to make sure she wasn’t skipping meals. “In the beginning I would crack the whip on her. She didn’t like it much,” he says. (She affectionately calls him a “food Nazi.”) And when Todd “scolds” Aracely for sneaking in a dessert, she points out that he drank two glasses of wine instead of one.

The couple has also learned to exercise together. “Running together was helpful because we were at the same level—really bad—and improved at the same rate,” Todd says.

Because of his dedication to improving his health, Todd never had to purchase a bigger suit—but he had to buy a smaller belt. And 90 percent of Aracely’s wardrobe fits more loosely than it last summer.

Stay committed to the cause. You have to recognize you are making a huge change and be “all in” before you can proceed. —Todd

Don’t view this as a chore. Think of this as an opportunity to open up a new series of hobbies you and your spouse can do together, such as cooking, running, and shopping at Williams-Sonoma for nice kitchenware. —Aracely

Related Items60 Pounds LostOver 60 Pounds LostrunningSEO
← Previous Story I Lost 50.7 Pounds: Taking Care of Me!
Next Story → I Lost Weight: Suzie Skidmore Lost 104 Pounds And Was Finally Able To Help A Friend In A Big Way