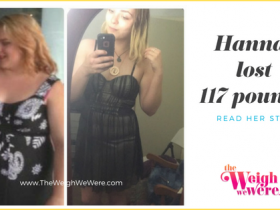 Weight Loss Before and After: Hannah Dropped 115 Pounds And Never Looked Back

Alisha went from being a fad dieter to a healthy eater and an avid exerciser. Her success came from a change in attitude. Instead of telling herself she would fail, she convinced herself she would succeed. Now, at 110 lbs. lost, she still reminds herself that she’s a success every day.

1. What prompted you to begin this weight loss journey? Did you have an “Aha!” moment?  I began working with a couple of guys who were very into fitness. As I started listening to their stories, I realized that I could do that and, more importantly, wanted to do it.

2. What other “diets” (programs, products, plans, or services) had you tried in the past?  I was very much a fad diet follower – anything that came out, I tried it.

3. Please describe how you reached your weight loss goal. What changes did you make to your usual diet, activity, lifestyle, and attitude? Did you implement any other strategies besides Calorie Count? What was the most important change?  I changed. It started with changing my attitude from “this is too hard, I’ll just fail” to “I want this more than anything and I WILL do this.”

Attitude was the hardest thing, but it’s the most essential. Seeing yourself as a failure will turn into failure. Yes, it’s an everyday struggle and sometimes you have to look yourself in the mirror and just cry, but it’s all worth it. Once the attitude was adjusted, I started home workouts – things I had done in the past for a day or two, but this time I stuck with it. I switched up videos every six weeks and became addicted to the Biggest Loser workouts and ultimately Jillian Michaels and Bob Harper workouts. Exercising is AMAZING – I began to realize that on days I didn’t work out, I was miserable and angry. I needed that boost in the morning to kick my butt into a positive gear. Along with the exercise, I started counting calories. I started out documenting what I was currently eating, to get an idea of what I was really consuming. Once that was done, I cut out probably 500 calories. After I maintained a 1700 calorie diet, I started to change the things I was eating – 1700 calories of soda and candy is not filling. I began incorporating fruits, veggies, LOTS of water, and more filling foods in general.

This is when I found Calorie Count.

4. Please describe how Calorie Count was instrumental to your weight loss.  I knew how much I was eating, but didn’t have a way to ensure that it was balanced. Calorie Count has allowed me to explore more food options and know that I’m maintaining a balanced and healthy way of eating. It also helped me feel accountable. I would look at the doughnuts in the office and think, “Man, if my supporters saw THAT on my food log, they’d be really disappointed.”

5. What difficulties did you experience losing weight?  Keeping myself motivated. I would be OK for about 6 weeks and then the boredom of the routine would set in and the cravings would kick up a notch and I would go through a whole week of fighting with myself. I eventually learned that changing up your routine and the foods you eat is a necessity to keep you on the right track.

6. How long did it take you to see results? When did you realize that you were a success?  My clothes started getting smaller within a month or two, but I personally didn’t “see” changes until I started comparing photos about a year into the process. I still carry around a “fat person” mentality and see myself as a bigger person. Holding those two photos side by side was astounding – I couldn’t believe that I had done that, that I had actually changed. I have to remind myself daily that I’m a success – it’s going to be an entirely different adventure to catch my mental image up to my physical one.

7. How do you prevent relapse?  There’s no such thing as preventing a relapse. I’m going to eat doughnuts and pizza and I’ll drink plenty of beer. But the key to not failing is realizing and accepting that these things are going to happen and that tomorrow is another day. On days I would start to feel guilty, I would justify eating that icing-covered cookie with spending an extra 30 minutes at the gym. Pretty soon, that cookie didn’t seem worth it.

8. How has your life changed now that you’ve lost weight?  I’m definitely more of a planner and routine follower than ever before. I also try to incorporate exercise into my social events – weekend with the girls? Let’s go hiking! Team outing? Let’s do sports!

9. How long have you maintained your current weight?  I’ve been stuck at wonderful 165 since December 2012, so 7 months. Truth be told – getting to 155 is an ideal and definitely more about vanity than anything else, so I’m not horribly worried about where I am.

1. Love you for what you are now

3. Don’t beat yourself up – losing weight is not about being perfect, it’s about effort

5. Remind yourself why you started