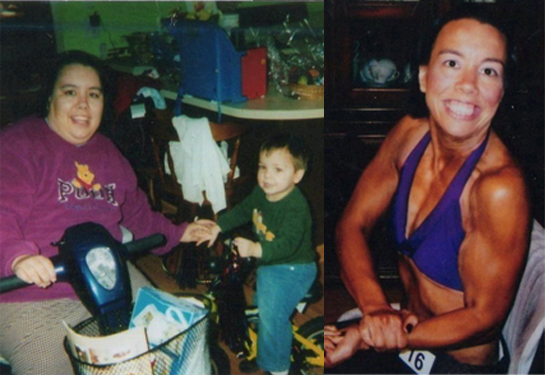 WHEN DID YOU START DEVELOPING A WEIGHT PROBLEM?
I believe it didnt happen till I was a senior in HS, when the stress of my mom having been diagnosed with cancer caused me to eat whatever and whenever. I put on over 100 pounds but worked to lose it in 1992.
so my story is a two fold story. i went from 208 down to 120 in 1993, kept it off all the way till 1999 when my own struggles became harder.

in 2006 on my birthday I decided to lose the weight I had gained. I was hoping to lose 40 pounds because I didnt think that in a scooter, itd be possible to lose more. boy i was wrong. I went from 232 pounds to 120 pounds and kept it off easily till 2014. but things happened where it was harder to move and i gained 20 pounds in 2014, which i am and WILL lose.

HOW DID YOUR WEIGHT AFFECT ANY ASPECT(S) OF YOUR LIFE?
I became more confident, and even entered my first wheelchair bodybuilding show in 2011 . I did two in 2012 and one in 2013

WHAT WAS THE “TURNING POINT” THAT GOT YOU STARTED ON YOUR WEIGHT LOSS JOURNEY?
my mom passing away I wanted to lose the weight as a tribute
the second time- i did it to prove that even in a wheelchair, losing weight and inches is possible

HOW DID YOU GET STARTED?
I started by joining Jenny Craig, and working out in a gym and hiring a trainer. Ive been with several that Im so thankful for People like Jenn, Matt, Justin, Steve, Kyle, Brandon, Amanda

HOW LONG AFTER YOU STARTED DID YOU BEGIN TO SEE RESULTS OF YOUR WEIGHT LOSS EFFORTS?
probably a year

WHAT WAS THE HARDEST PART?
being in scooter, just keep on challenging and believing it will happen

DID YOU EVER WANT TO GIVE UP? WHAT KEPT YOU GOING?
my trainers, my dad , my friends, the body building community kept me going

DID YOU HIT ANY WEIGHT LOSS PLATEAUS? HOW DID YOU OVERCOME THEM?
like with anyone, we all hit plateaus. But we just have to keep believing in ourselves and never give up.

HOW LONG DID IT TAKE YOU TO LOSE MOST OF THE WEIGHT?
about 2 years

DID YOU HAVE ANY NON-SCALE VICTORIES?
my wheelchair bodybuilding shows
keeping off most of the weight and losing over 48 inches.

WHAT DOES YOUR DAILY DIET LOOK LIKE COMPARED TO WHEN YOU WERE HEAVIER?
no pizza, no chinese food, trying to keep portion control IN control

when im stressed I overeat and sugar is a taboo. So I keep those things out of the house

HOW DOES YOUR PHYSICAL ACTIVITY COMPARE TO WHEN YOU WERE HEAVIER?
for me, anything is BETTER than doing nothing.