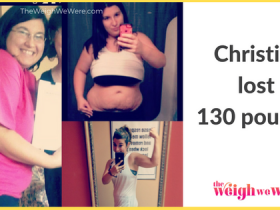 I have struggled with my weight ever since I could remember. I recall always being overweight as a child. By middle school I was already weighing over 200 pounds.

HOW DID YOUR WEIGHT AFFECT ANY ASPECT(S) OF YOUR LIFE?  My weight caused a lot of insecurities. I was bullied in school for being over weight and as I got older my weight started to cause health issues. I have had 3 surgeries and none of them were for weight loss. My first was for my Gal Bladder, 2nd for appendicitis, and third was for a tumor found in my large intestine. That is not including the other procedures I’ve had.

WHAT WAS THE “TURNING POINT” THAT GOT YOU STARTED ON YOUR WEIGHT LOSS JOURNEY?  My turning point was December 2015 when I was told they had found cancer in my uterus. I thought to myself. ” No, not again, I cannot go through anymore medical procedures/surgeries.” My doctor told me he would start me on medication but if I did not make a change the cancer would just keep coming back.

HOW DID YOU GET STARTED?  My mom helped me start. She after all had years of consuming the Herbalife products. I was reluctant and had vowed to her millions of times she would never see me join the Herbalife band wagon. Well as a last resort I tried it. I had tried numerous diets before from weight watchers to the military diet and none seemed to help.

HOW LONG AFTER YOU STARTED DID YOU BEGIN TO SEE RESULTS OF YOUR WEIGHT LOSS EFFORTS?  Everyone saw results before I did. I would feel my clothes a bit looser but I could not see the change until I dropped 20+ pounds.

DID YOU EVER WANT TO GIVE UP? WHAT KEPT YOU GOING?  Plenty of time but luckily I had gained the will power to not go back to my old ways.

DID YOU HIT ANY WEIGHT LOSS PLATEAUS? HOW DID YOU OVERCOME THEM?  Yes, plenty. I had understand that for lasting results I would only be losing 1-2 pounds per week.

DID YOU HAVE ANY NON-SCALE VICTORIES?  Yes, it felt like I would never see the scale under 200 pounds.

WHAT DOES YOUR DAILY DIET LOOK LIKE COMPARED TO WHEN YOU WERE HEAVIER?  I would sit on the couch with a bag of chips or a large bowl of cereal. I did not care how much of it I consumed, I would just eat until it was all gone or I was full.

HOW DOES YOUR PHYSICAL ACTIVITY COMPARE TO WHEN YOU WERE HEAVIER?  I used to struggle to run 1 mile and now I just don’t want to stop. Physical activity was the last change I made. After all it’s 80% nutrition 20% exercise.