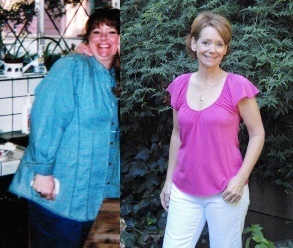 I often wonder what my life would be like had I not finally turned my dieting career into a healthy lifestyle. A lower carbohydrate paleo diet has literally saved my life. I am now 48 years old and weight 130 pounds.
By the time I was 14 years old, I had undergone two exploratory surgeries. The first surgery revealed an ovarian cyst and the second, from what I can determine now, gastritis. The physician removed my appendix “for good measure”, sewed me back up and my Mother insinuated that I was faking my symptoms. The problem was that I was chronically constipated, suffered gastric distress, and developed a Tourette style tic along with ADHD & OCD behaviors
This was the early 1970s – and information was limited both medically as well as psychologically. In retrospect, I’m thankful. Other than several rounds of antibiotics for various strep infections and hormone therapy for the PCOS, no other medications were offered to me. Today’s children going through the same thing would likely be offered a handful of drugs.I now understand that my diet and my behavior were and are directly linked. I was about 15-20 pounds overweight for most of my childhood. My Mother was conscious not only about her weight, but mine as well. We went on diets frequently but they were always fad diets to lose weight – only to discontinue it after several weeks or upon arrival of an event we had been dieting for. My best memory of dieting was the TWA Stewardess diet that was quite popular in the 1970s. What do I remember most? That I was always hungry. I remember constantly thinking about food. A box of candy, a plate of fudge or cookies, I would try to eat as much as I could as frequently as possible. If any food was in the room, it was constantly on my mind.
As a child, I remember fainting a couple of times. Other times I felt out of control – all the while constantly hungry and, consequently, irritable. I had no idea that I was having blood sugar balance issues until I began studying nutrition.
Fast forward several years, many diets later, and I was still un-focused and a smoker, consuming too much alcohol, and 215 pounds on my 5′ 4″ frame. It was time once again for Weight Watchers. I was successful with this diet after my third child – but never without the assistance of diet pills. I had what I thought was a ravenous appetite all the time – but made it partially work anyway through guilt. Each diet I chose was notoriously a low fat diet and I had major cravings and constant hunger of which I could not function on.
Follow-through and perseverance are not virtues of the typical ADHD person unless there is a great deal of interest. Moreover, the ADHD person is also more inclined to become addicted to substances such as appetite suppressants and most particularly “uppers” – like diet pills. Yes, I was that statistic. We all have our dirty little secrets to try to achieve goals – and hopefully if I share mine, you will realize that there is an easier, more efficient way.My husband and I always shopped together and tried to make healthy choices – usually serving chicken and vegetables – but it was always low-fat or non-fat with plenty of bread. Like most parents, we did the best we could with the information we had. These were the years I followed the USDA food pyramid and low fat diet advice. I even tried a vegan diet for a stint.I finally figured out that whole wheat sandwich rolls and loads of vegetables didn’t feed me efficiently despite that my doctor convinced that this was the right diet for humans.
RELATED:   Real Weight Loss Success Stories: Madison Shed 134 Pounds With Weight Loss Surgery

On February 7th of 2000, I started the Atkins Diet. In the first few days of increasing my animal proteins and fats, and eating 2-3 cups of vegetables daily, I was a new person. The weight began falling off, my energy levels soared, my focus became clear, and I was not hungry! Never had I felt like this on any other diet in my life.
I found a need to further my education with the discoveries I was making about myself. At this point, I could not quite explain the positive emotional, physical, psychological or physiological changes happening to my body until two text books which I now call my “saviors” were introduced to me at The Bauman College of Holistic Nutrition. Know Your Fats by Mary Enig and The Diet Cure by Julia Ross. The revelations I had about myself were almost astounding. How could someone write a diet book that described almost everything about me! That was the point in which I knew I had found a diet that fit me for a lifetime of better health. This was not easy in a grain-heavy, predominantly low-fat driven culture. I gravitated to these writings and began to ignore some of the low-fat propaganda to the contrary.

RELATED:   Before And After: Afrine Lost 80 Pounds And Found A Healthier Lifestyle!

I was (and still am) so passionate about learning that I located forums and podcasts of various types labeled “low carb.” This was six years ago, and was when paleo entered my life.

I eventually learned that I was practicing paleo, and the more I learned the more confident I was that I could maintain a paleo lifestyle.

Thanks to the work of many (especially Robb Wolf for the plethora of solid, scientifically cited information he gives to the Paleo community) I figured out that my digestive disorder began from not breast feeding, then from being given baby formula, and that it was was perpetuated by gluten. The tic I had was a result of gluten intolerance, and I am excited to report that the tic is gone.

During my transition, my husband not only witnessed my transformation but very patiently listened to me while I regurgitated the information I was learning. He is a smart man, and that made it easy for him to make the transition with me.