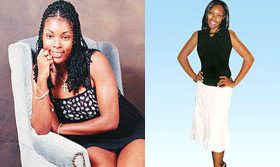 Name: Levoris “Re Re” Anderson

How I Gained It: I was unhappy in so many areas of my life and developed a serious overeating habit along with being totally inactive. I ate everything. My favorites were bacon, eggs with cheese, sausage, chocolate cake, pork chops with gravy, white rice and potato chips. I woke up one day and realized I had ballooned to almost 200 pounds. I really needed to lose weight.

Breaking Point: When my sister graduated from community college, I saw myself in pictures from the event and thought that wasn’t and couldn’t be me. It was a complete eye-opener, and I decided that day to lose the weight. In May 2006, I looked at the unhealthy woman I had become for the last time. I got on the scale one last time, saw that number that started with a two, and it convinced me it was time to just do it.

How I Lost It: My first step was talking to a physician in the office that I managed. I received some great advice. That same doctor and I later decided to have a “Biggest Loser” style contest in the office. I was skeptical, because I had tried to lose weight before and couldn’t, but I decided to enter — and I actually won! I lost 10 pounds and couldn’t believe it. I kept going, and lost 15 more pounds over the next couple of months.

I plateaued after those 25 pounds, and then spoke with a friend at the gym who was a bodybuilder. His advice was to get a trainer. Working with a trainer helped me drop another 30 pounds, and I couldn’t believe it. In June 2009, I was invited to a bodybuilding competition, and I was instantly hooked by looking at those fit young ladies on stage. I saw my new goal. I kept saying I wanted to look like that. I contacted a trainer for one of the beautiful women on stage and went for an assessment and then my first training session. In July 2009 I was on my way to competing in my first figure competition. I was excited but I honestly didn’t know what I was getting into.

I weighed in at 130 pounds and 30+ percent body fat. I was motivated to compete in a show in May 2010. I changed my diet to clean eating: no sweets, fruit, sugars or chips. I consumed oatmeal, rice cakes and foods I had to learn to love. When I started seeing results and muscles, I got extremely motivated.

In 2012, I started working with a new trainer, who has coached me through intense strength-training sessions and is determined to see me succeed. I was also working with a wonderful nutritionist who has helped me gain muscle and shed body fat in all the right places.

My goal to increase my placement from last to top five came true in 2013, when I received my very first first-place finish in the over-35 division. With a total of four second-place trophies, I qualified for the national competition. I feel like I’m just getting started. I’m still going even at the age of 45 and looking forward to my next competition in 2014. If it wasn’t for my friend introducing me to this world I wouldn’t be in this wonderful sport. My life has been a rollercoaster ride, but I wouldn’t trade it for the world.