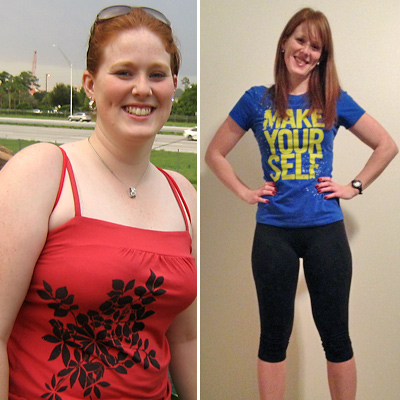 What was the “turning point” that prompted you to lose weight?  I had just gotten back from a trip to Disney World with my mother. When we got the prints of our photos back, I was shocked and ashamed. I couldn’t believe I let myself get so heavy.

When did you start trying to lose weight?The trip to Disney was in the summer of 2007. My weight loss “journey” started then, but it took me a long time to get to where I am now. Even though I initially lost 40 pounds, I would gain/lose another 20 for the next four years or so.

How did you get started?I cut out fast food, stopped drinking my calories, and reduced my portion sizes. Eventually in 2011 I joined Weight Watchers to help me stay on course and learn more about what a healthy balanced diet really meant.

What was your biggest challenge?

Overcoming the yo-yo cycle. Like I had said, I lost and gained weight for nearly four years after making the initial decision to lose. I didn’t really get over the “hump” until I decided to include exercise in my life. I also stopped calling what I was doing a “diet.” I wasn’t dieting anymore; I was going to be eating this way for the rest of my life. I had to stop thinking that this was short term.

Were there any times when you wanted to quit or give up? How did you stay motivated?

Yes there were lots of times! Honestly, I would look back at my picture from Disney and remind myself that I didn’t want to be that way ever again. Even today, sometimes it still happens. It’s easy to get demoralized by a number on the scale when it hasn’t moved in weeks. You feel like you’re not doing enough or eating as well as could be. Luckily for me when I’m feeling really down, my husband will remind me how far I have come. We didn’t meet until after my weight loss, but he understands where I’ve been and he is really supportive with helping me get to where I want to go.

RELATED:   Weight Loss Before and After: I Took Back My Life And Dropped 40 Pounds

If you reached a weight loss plateau, how did you break out of the rut?

For me it was the last “five pounds” which is so cliché, but so true. In fact, after I overcame the plateau, I lost an additional five pounds to where I am right now. When I hit that spot I started working with a trainer. He helped me target areas that I wanted to work on. It was actually the first time I ever started lifting weights. I felt a little awkward at first, but once I got passed that, it was great. I found that I didn’t need to just burn fat off; I could turn some of that into muscle.

I run on the trail 4-5 times a week, plus I strength train 2-3 times a week. My running mileage varies depending on the day, but typically 3-4 runs are three or four miles and my long run is over five miles once a week. My strength training consists of a lower body workout, upper body workout (focusing on biceps and triceps), and a cross-training day where I really work my lower body and core hard. This helps keep me strong for my runs.

I’ll typically have a banana before I head out the door for my run. After, I’ll have a whole-wheat bagel thin with peanut butter. Lunch is generally a whole-wheat wrap with turkey and hummus plus some fruit. For dinner I’ll have a piece of grilled chicken, green beans, and brown rice. I snack on Greek yogurt, raw almonds, or fruit in between meals if I start to get hungry. I also love to nibble on low-fat cheese pieces.

Greek yogurt with a tablespoon of Grape Nuts is my absolute fav! I probably have it nearly everyday. I’m also addicted to Oatmeal Nut Butter balls, which I added to my website lose.move.live. They are delicious and packed with protein and fiber!

Do you have specific suggestions for avoiding temptations?

Whenever I was tempted I would say to myself “Don’t sacrifice what you want now for what you want most.” Then I would try to picture myself at the size I wanted to be. Sometimes that wouldn’t be enough though and I would succumb to temptation. I believe that it is better to make a conscious decision to have something you’re craving, than to eat it with guilt. You’re going to slip up from time to time, be okay with having those moments and then move forward. The worst thing you can do is to be so strict with yourself that you end up binging.

Amazing. I am doing things that I never thought were possible. Last year I completed a Tough Mudder event and right now I’m training for my first half-marathon in November. I am working on my Fitness Nutritional Coaching certificate so that I can help others live a healthier lifestyle too. I have a blog where I talk about my struggles and remind people that weight loss is possible for anyone. You don’t have to be extraordinary to do it, just committed.

If you have any suggestions to others what would they be?

My advice is to never, never, never give up. I say this over and over again in my blog. I gained weight and lost weight, and gained it back – but eventually something clicked for me. I also tell people that you have to lose weight for YOU; not for an event, something else, or someone else. Usually those things come and go and when they do, so does your motivation. Also, don’t be afraid to make small changes to your lifestyle to start. Changing everything at once may be overwhelming and can sometimes sabotage your success. Making one small change, getting used to it, then making another, can help you ease yourself into a healthier, and happier life.