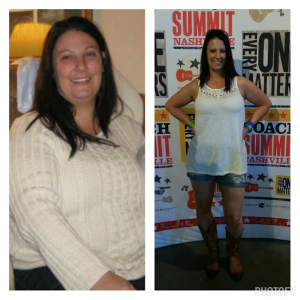 WHEN DID YOU START DEVELOPING A WEIGHT PROBLEM?
I didn’t struggle with my weight all of my life. It really started in my early 30s. I started to become an emotional eater and food became my comfort. Around 2009 I decided I needed to do something and started to get in shape. Shortly after doing so, I ruptured a disc in my lower back. I already had bad knees now I was really messed up and not able to exercise. I decided in 2011 to finally have back surgery. I was hoping that it would take away the pain and allow me to exercise and get healthy again. The back surgery was unsuccessful and made me 100 times worse. One week after that surgery, I received the worst news a mother could receive. My 19 year old son had been violently murdered. Life as I knew it was gone and I was forever changed. I began to eat my pain away. In only a matter of 3 months I gained at least 50lbs. I developed PTSD, anxiety and depression. I was a mess. Six months later my husband and I decided to have a baby and well, I gained another 30-40lbs

HOW DID YOUR WEIGHT AFFECT ANY ASPECT(S) OF YOUR LIFE?
I was uncomfortable in my own skin. I became more and more depressed. It was hard to get up and get going everyday. Honestly I really didn’t like myself and how I let myself go. I was miserable, tired and sick all of the time. It felt like I was always at the doctor or emergency room for something.

WHAT WAS THE “TURNING POINT” THAT GOT YOU STARTED ON YOUR WEIGHT LOSS JOURNEY?
After the death of my son, two back surgeries and a new baby I was exhausted. I didn’t think I would ever change. Then I saw a picture of myself from Christmas of 2012 and was shocked by what I saw. Seeing this picture and how big I really was, started the wheels turning in my head to want to make a change. I started to see a friend posting about her weight loss journey and it made me think “Why not me”. I followed her for about 9 months continually asking what she was doing and responding that it wouldn’t work for me. Then she showed me her amazing before and after picture and I was sold.

HOW DID YOU GET STARTED?
After watching my friend for 9 months, I finally just jumped in with eyes closed and both feet and told her to sign me up with exactly what she was doing. That I would do whatever I had to do but something had to change.

HOW LONG AFTER YOU STARTED DID YOU BEGIN TO SEE RESULTS OF YOUR WEIGHT LOSS EFFORTS?
I lost weight the very first week and changes became visible within the first month.

WHAT WAS THE HARDEST PART?
First thing is I had to get out of my own way – and just do it. I also had bad knees, back and neck. I suffered from chronic pain, PTSD, Anxiety, depression and grief. Grief is a whole other monster. It’s a roller coaster of emotions never knowing which one will come. Money was a little tight, but I decided that I was worth it, plus the program I decided to do had a 30 day money back guarantee so if it didn’t work – I could get my money back.

DID YOU EVER WANT TO GIVE UP? WHAT KEPT YOU GOING?
Absolutely! A million times. And a few times I actually did.. but then a little voice inside my head said “you are totally worth it”, “do it for them”. Every single day is a struggle, I just have to remember that God gave me life to live not to abuse.

DID YOU HIT ANY WEIGHT LOSS PLATEAUS? HOW DID YOU OVERCOME THEM?
Yes. It seems after a few months of doing the same thing my body wants to STOP losing weight. I change up the type of workouts I do so my body doesn’t get completely used to one thing and I get bored fairly easily so change is good for me. It can be very discouraging when the scale doesn’t move. I have stopped focusing on the number and redirected it to how I feel and what I put in my body. The scale is only a number.

HOW LONG DID IT TAKE YOU TO LOSE MOST OF THE WEIGHT?
I would say I lost a lot in the first 6 months, but overall about 1 year.

DID YOU HAVE ANY NON-SCALE VICTORIES?
These are so much better – Gave up soda and fast food. My clothes became too big, my back and chronic pain were minimal now, my knees didn’t hurt as much, I no longer take any pain meds, anti anxiety or anti depressants. My cholesterol went down.

WHAT DOES YOUR DAILY DIET LOOK LIKE COMPARED TO WHEN YOU WERE HEAVIER?
Previously I was drinking A LOT of soda, eating JUNK, greasy fast food and huge portions. I noticed that after getting healthy that 2 of us were eating what could feed a family of 4 with leftovers. We eat at home a lot more now.
I am an 80/20 girl – I eat healthy 80% of the time and try not to worry so much about the other 20%.
I eat cleaner – this is a process and a lifestyle change – I am not and never will be perfect.

HOW DOES YOUR PHYSICAL ACTIVITY COMPARE TO WHEN YOU WERE HEAVIER?
WOW!!! When I first started working out I couldn’t get through the 25 min videos. Unable to do most of the moves, I would jog in place ALOT. I couldn’t even do a jumping jack .

Now I can mostly keep up with all the videos and modify the moves when necessary (there are some moves I physically can’t do because of my back and knees, so I modify) I have no issues getting through a 30-60 min workout!!!