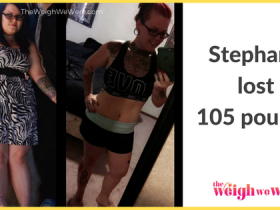 I have had a weight problem since i was a teenager. As far as i remember i have been over 200 lbs since i was at least 16 yrs old. I started diets early with no success, i gave birth to three children at more then 350 lbs. After the birth of my 4th child my weight ballooned up to 413 lbs. It might have actually gotten higher but at that weight the scale isn’t anyones friend.

HOW DID YOUR WEIGHT AFFECT ANY ASPECT(S) OF YOUR LIFE?  I unknowingly stopped doing things. I thought i just didn’t like to do things. This isn’t the case i just some how decided i couldn’t do them. By the time i reached 413 lbs i was no longer an active part of my life or my childrens lives i was just someone on the outside looking in.

WHAT WAS THE “TURNING POINT” THAT GOT YOU STARTED ON YOUR WEIGHT LOSS JOURNEY?  After watching extreme weight loss almost two years ago and spending the summer smoking more then a pack of cigarettes a day and beating candy crush i realized how low i had become. It literally was like a light bulb finally got switched. I decided i was going to dedicate one year to health. I didn’t know what it was going to look like but i was going to make one choice a day to make my life better. I decided that year was going to pass anyway and i could either get fatter or i could get healthier.

HOW DID YOU GET STARTED?  After my light bulb moment i got really upset. I was mad that i had allowed my life to be dictated by chemicals. That i was going to eat according to my addictions. I also knew that trying to change everything all at once was a bad and unsuccessful idea in the past. So i cut out one bad habit a week so i could get a grip on cutting it out of my life before i added a new bad thing to cut out. So week one i cut out sweet tea which also meant i was cutting out mcdonalds. I didn’t know how to go to mcdonalds and not get the tea. The following week i cut out my cigarettes and i probably should have started with that but i didn’t. The following week it was white carbs and so on. I also didn’t actually start cutting calories for quiet awhile. I cut things out then went to tracking what i was eating with myfitnesspal app and then i started cutting calories.

HOW LONG AFTER YOU STARTED DID YOU BEGIN TO SEE RESULTS OF YOUR WEIGHT LOSS EFFORTS?  Right away the first three days of cutting out an addiction seem to be the hardest but once its out of your system you can start to feel less controlled. I don’t remember when the weight itself started coming off but i do know i lost 60 lbs in 5 months so i was feeling pretty good about that.

WHAT WAS THE HARDEST PART?  This whole journey is a challenge to overcome. I think for most of us the biggest challenge is ourselves. Having to fight all the addictive behaviors. Fighting the mindset you have set for yourselves probably for your whole life. Or fighting maybe a past abuse and what someone else has told you. The other stuff people complain about i feel are just excuses that stem from the fight and struggle with thereselves.

DID YOU EVER WANT TO GIVE UP? WHAT KEPT YOU GOING?  I never had what most people refer to as inspiration or will power. I decided to be successful i needed to treat myself like i do my children. I don’t give my children an option about doing what i think is best for them i just make them do it. And thats exactly what i had to do with myself.

DID YOU HIT ANY WEIGHT LOSS PLATEAUS? HOW DID YOU OVERCOME THEM?  Yes i hit them all the time. I will go for three or four weeks and the scale doesn’t move then all of the sudden ill be down 8 lbs. I have learned to not put all my value in the scale. I try on new clothes. I take my measurements. I trust the process. If you know your doing everything right eventually the numbers will move. And usually if they aren’t moving we know its either a stall or we are doing something wrong. You make the adjustment if you need to but trust the process.

HOW LONG DID IT TAKE YOU TO LOSE MOST OF THE WEIGHT?  I have lost this weight in the course of 2 years and still have 36 lbs i would like to lose. I am hoping that comes off over the course of the next year. But in the mean time im going to continue to work on me and build muscle and strength and stamina.

DID YOU HAVE ANY NON-SCALE VICTORIES?  I have them all the time. I look for them regularly. The little things like playing at the park with my kids to the big things like not having to worry if a chair has arms. Not worrying if im going to fall. I am So much more a participant in my own life and that is the biggest non scale victory i could have.

WHAT DOES YOUR DAILY DIET LOOK LIKE COMPARED TO WHEN YOU WERE HEAVIER?  At 413lbs my diet looked like Mcdonalds dollar menu and 2 or 4 sweet teas a day. Maybe dairyqueen or half a box of waffles for dinner. It really sucked. Today i have a protein shake and maybe a banana for breakfast. For lunch its usually lunch meat rolls with pickles. then dinner is sauted veggies with some kind of meat. i also have yogurt or hummus as a snack and two more protein shakes threw the day.

HOW DOES YOUR PHYSICAL ACTIVITY COMPARE TO WHEN YOU WERE HEAVIER?  It is very very different. By the time i got fed up with myself i was only moving out of necessity and never cause i wanted to do something. Now i go to the gym regularly, i take my kids to the park on the regular. We went berry picking yesterday and i stayed in a low squat for probably 5 minutes and got up with ease.