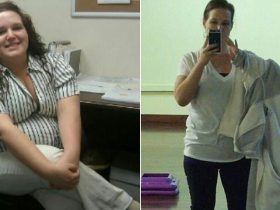 I don’t know how to begin this testimony. My heart gets tight even thinking about writing it. Just thinking about it takes me to a place I don’t really want go.

I guess I never really, really, really thought about why I became the “fat guy”. In high school I was the athlete. I was a football player and a wrestler.

But an injury here and an injury there, turned me into the “fat guy”. In my youth I thought fat people were a joke, and there I was—the joke. I played it off like I didn’t care for years. That is until I met a friend who was brutally honest. I had amassed a certain amount of wealth. In part because I was making a good living and to a greater extent being very frugal.

My friend told me, “Jed, how many 6’3 men over 360lbs do you know over the age of 60?” Though I had amassed wealth, I had been confronted with the fact I was not going to live long enough to enjoy it. My lifelong goal had been to retire at an early age and live by the beach in a home of my own. Well, pushing 360 I came to the conclusion that that dream wasn’t ever going to come true if I continued in my lifestyle. I don’t drink, and I have never taken drugs. However, what I have learned is that I deal with stress by eating.

And, I am not really a foodie. I don’t care what the food taste like, just so long as I got the feeling of being full. Food had definitely became a way to fill the voids in my life. So, with the words of my best friend, “Jed, you will never enjoy your wealth, because you will die a lonely broke fat man before your time; because your money will go to waste on medical bills, and with no money no woman is going to overlook 360 pounds of fat.”

I decided to make a change. Since I didn’t care what I ate so long as I was full, I began to eat healthy. Which included, protein bars. WOW, let me tell you. I had eaten so many brands of protein bars in my life, I was thoroughly impressed with, Quest Nutrition Bars. I had normally only eaten one nutrition bar a day, but with Quest, I found myself eating 3 to 4 bars a day; so tasty. I actually had to cut back on my protein bar intake.

Just the fact alone that they taste good gave me pleasure, and it was this pleasure that really quenched my appetite. I enjoyed eating them even though they were healthy. As I began to lose weight I began to increase my activity. But, I really didn’t enjoy exercising anymore. Again my best friend (a Physical Education teacher) said to me, “Jed, in my class I teach my students that they don’t have to be good at all these activities, nor do they have to enjoy them all. The real key to living healthy and fit is to find some activity that you enjoy doing and do it as often as you can.” He was right. I quickly knew what I wanted to do.

I wanted to wrestle again. It was a sport I loved to do and to coach, but being over 360lbs and out of shape I never thought I could do it again; which actually from time to time would make me quite sad and depressed. It was kind of like thinking about an ex-girlfriend who you wish was still in your life. So motivated by the weight loss and the desire to wrestle again I began to push myself. Little by little, day by day, I got closer and closer. I found myself a new teaching job and became the head wrestling coach at my new school—I really threw myself in the deep end, and I was determined to swim to shore. Well, I made it. I get asked all the time how I did it, and honestly, until I had to write it down I guess I never really was clear about it. In closing I would like to let all the ladies out there know I am single and ready to mingle. Add me on Facebook http://www.facebook.com/JedClark

My 5 keys to success.

1. Take notice. If I hadn’t taken notice of where I was at and where I was headed I would not have made the change. I finally listened to my best friends words, “You’re going to die…”

2. Have a plan and stick to it. Sit down and write it out if you have to.

3. Change your lifestyle. Put yourself in a position to live healthier. A recovering alcoholic doesn’t hangout at bars.

4. Be active by doing what you love to do often. There is something for everyone.

5. Be patient. Be diligent. Be determined. It’s not going to happen overnight; so get that out of your head, it will destroy your desire.