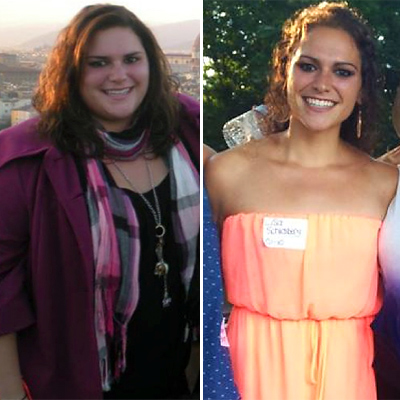 What was the “turning point” that prompted you to lose weight?
Being overweight my entire life, I experienced countless moments every single day that reminded me I should try and lose weight. The older I got, the more overweight I was, so these experiences started to build up and they became harder to ignore. Climbing the stairs was difficult, getting dressed was complicated, and I found myself constantly worrying about whether the seatbelt was going to close or if I’d fit in the chair. But I do remember one specific moment: I was in an abnormally small bathroom stall at an airport in Australia. I recognized that it would be small for anyone, but I could barely fit. I was struggling to close the door, I sat down on the toilet, and started thinking about the situation I had created for myself. I thought to myself, “You’re 17 years old. This is no way to live your life. Please do something about this, and please do it soon.”

How did you get started?
I joined Jenny Craig while I was living in New Zealand for an abroad internship and lost 30 pounds. I stopped Jenny for freshman year of college, where I gained back around 7 pounds. After that year I continued with Jenny for roughly eight months and then gradually took matters into my own hands.

What was your biggest challenge?
My biggest challenges were more emotional and mental than physical. My all-or-nothing attitude made matters regarding food black and white from the start; some things were allowed and some weren’t. It started with my reluctantly following the rules until making healthy choices just became habit, so for me staying on track wasn’t incredibly difficult. I lost my weight very quickly so the biggest challenge was dealing with the psychological aspects. I managed to lose around 125 pounds in one year, so I was constantly overwhelmed by attention and shocked by my own physical appearance. My head and my body are still in very far away places from each other, so catching up to reality after such an extreme and rapid loss is proving to be the most difficult part.

Were there any times when you wanted to quit or give up? How did you stay motivated?
Of course there were times where giving up entered my mind, but never as more than a fleeting thought. There are three important things to remember when it comes to wanting to quit. The first is that you’re human; you can make mistakes and you can screw up. You can always fall off but that means you can also always get back on. The second is that the difficulty level doesn’t always stay the same; some days at the gym you will have an inexplicably terrible workout and some days you’re just starving from the minute you wake up to the minute you fall asleep without reason. These things happen but they don’t last, so keep calm and carry on. The third thing that really helped me, especially in the beginning, is thinking rationally. I kept thinking, “you’re overweight, and the only way to change that is by losing weight.” To me, I didn’t have a choice but to keep going. This goes along with keeping everything in perspective – one meal is just one meal and one day is just one day. You will wake up and start over.

If you reached a weight loss plateau, how did you break out of the rut?
I hit a significant plateau that lasted for about an entire month and it was PAINFULLY frustrating. I decided that it would be a good idea to survive almost exclusively on vegetables; I started actually enjoying salads, so I ate them for every meal. Every morning I would wake up, weigh myself, and try to understand why that method wasn’t working. It takes some personal experience to realize that less is not actually more. When I was advised to add a significant amount of protein to my diet, the pounds started coming off again. I really believe that people can give you tips such as adding food to your diet, but until you see it making a change, it’s hard to believe it will work.

My plateau was, in hindsight, the greatest thing that happened to me during this entire process. Overlooking all the days my mood was completely destroyed because of it and all of the mental challenges that came with it, I realized how significant the plateau actually was: it was the first time I was eating right and exercising just because I should. I saw that no weight was coming off, and no matter what I was doing I wasn’t losing, but sticking with it and staying on track was the most rewarding thing because it was the first time in my life I was just simply taking care of myself. Then when the weight did start coming off, I had a whole new appreciation for working out and for healthy eating than I ever had before. The plateau ended and it brought with it the best of both worlds: eating well and exercising became valued as important things independent of weight loss, and then they helped the pounds come off again.

What’s your current exercise routine?
I do cardio and weights every day. I do some sort of cardio (running on the treadmill, jogging outside, biking, swimming, stair master) for somewhere between 30-50 minutes. I switch off arm days and leg days in the weight room so my muscles have the required time to recover in between respective workouts. I’ve recently started to skip one or two days a week because doctor’s orders say “my batteries need to recharge” but this year has turned me into a real runner/gym rat so it’s hard to stay away!

What’s your daily diet look like?
Over the last year I have gone from tolerating, then enjoying, to actually craving a good salad, and as a result I now eat a ton of vegetables. I make sure to include protein, usually egg whites, chicken, or turkey breast. Whole-wheat bread and thin sandwich slices add carbs, and olive oil, nuts, avocado are great for healthy fats.

What’s your favorite healthy snack/meal?
I love snacking on fat-free yogurt because it’s a great source of protein and I find them SUPER filling. I’ve cultivated the habit of snacking mainly on vegetables (cherry tomatoes, carrots, celery sticks) and fruits, so I don’t really have a favorite “snack food.” A good tip for anyone that likes apples: cut it up, microwave it, top with cinnamon and any 0-calorie sweetener (Splenda, etc.) – tastes awesome and no added calories.

Do you have specific suggestions for avoiding temptations?
At some point during the weight loss journey I realized I had created a system for deciding how to deal with temptations without really realizing it. When I saw something I shouldn’t eat, I weighed the pros and cons: how good it will taste never outweighed how bad it will make me feel after eating it. Once I began feeling emotionally influenced by my slip-ups (I’d wake up the morning after carelessly eating with my friends and my entire day would be ruined because I’d be angry with myself), I realized that my emotions could be the tool to keep me in check. I started seeing forbidden food items just as sources of bad moods and regret until they no longer tempted me. When you realize that resisting temptation makes you feel good about yourself, it becomes addicting.

What’s your life like after weight loss?
It’s safe to say that my entire life is different. In addition to being physically more comfortable and agile, the most important thing is how I feel about myself. I’ve always been confident but now I wake up every day feeling like I’m on top of the world and can do absolutely anything. I have gained so much self-worth and self-respect from this – something no one and nothing will ever be able to strip from me.

If you have any suggestions to others what would they be?
This process has taught me the incredible power of cultivating a relationship with yourself. Nobody and nothing can help you lose weight; you can take tips and hear inspirational stories, but the only way to do it is by talking yourself through it. You have the power to choose optimism over pessimism and positivity over negativity. Food and exercise are just means through which you’ll find success, but this process is almost entirely mental, and ultimately you’re the only one in control. It’s true what they say, “Once you can control your mind, you can control your body.” I’ve become my own nutritionist, my own personal trainer, my own support system, and my own best friend. Find it in yourself to do the same and you’ll become equally as unstoppable.