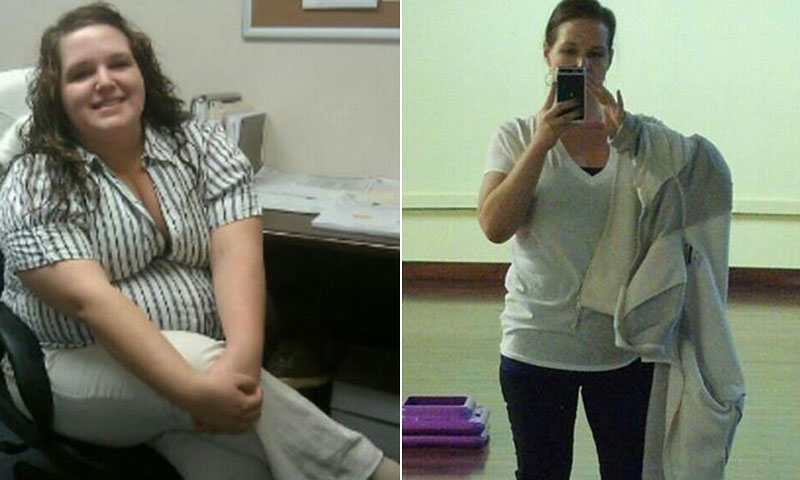 I was overweight as a kid, and then lost a bunch of weight by playing sports. Developed an eating disorder in high school, and when I was forced to face that things went downhill fast. I steadily gained weight, without realizing JUST how much. The day I started this journey I weighed in at 414.

HOW DID YOUR WEIGHT AFFECT ANY ASPECT(S) OF YOUR LIFE?  ALL aspects of my life were hard. I couldn’t care for the children like I wanted to. It was a strenuous task to just walk for long periods of time, and sadly ‘long periods’ was anything over 30 seconds straight. It was hard to find clothes, it was hard to keep up with friends, and mentally it was hard to feel like I had any form of self worth anymore.

WHAT WAS THE “TURNING POINT” THAT GOT YOU STARTED ON YOUR WEIGHT LOSS JOURNEY?  Chris and I watched an episode of Dr. Oz, where he followed a gentleman around for a week taking note of every single item that went into his body. At the end of the week they brought that guy into the studio, and laid out all the food, sodas, and candies that matched the week he had. At the end they talked about how having a waist measurement over a certain number doubled, if not tripled your chances of getting cancer, and other fatal illnesses. In this same episode they suggested pedometers, and walking 10,000 steps a day.

HOW DID YOU GET STARTED?  The very next morning, we got pedometers and started walking daily. We turned it into a competition when we QUICKLY realized I was NO WHERE near hitting 10,000 steps a day.

HOW LONG AFTER YOU STARTED DID YOU BEGIN TO SEE RESULTS OF YOUR WEIGHT LOSS EFFORTS?  Within a few weeks I started to see that I was capable of making that 10,000 mark, and slowly I started to feel less and less like I was going to die doing so. Within the first couple months I also started to lose weight.

WHAT WAS THE HARDEST PART?  I’ve hit a few places that in the moment seem like the “hardest” thing. Starting was probably the hardest part though. It sucked admitting that I was so far ‘gone.’ I was so athletic all through out middle school and high school, so admitting that walking a mile took everything out of me, and facing the number that appeared on the scale that first day was devastating.

DID YOU EVER WANT TO GIVE UP? WHAT KEPT YOU GOING?  I wanted to give up all the time. It was hard to keep going when I felt like I was dying just from walking. But I made it a point to tell people that were close to me that I was trying to get healthy and lose weight. It was these select few that kept me going until I got into a better place mentally, and began to create a routine for what I didn’t know then was going to be my weight loss journey.

DID YOU HIT ANY WEIGHT LOSS PLATEAUS? HOW DID YOU OVERCOME THEM?
I have been the weight loss journey that has hit its bumps, and had a few bruises. I lost about 65 pounds that first time around, but then quickly gained about 55 back when I thought that having friends, and being ‘comfortable’ were more important that getting healthy. I began working out, and trying to lose weight on a few separate occasions. However, I was never able to keep off a great amount of weight until this time around.

HOW LONG DID IT TAKE YOU TO LOSE MOST OF THE WEIGHT?  In September of 2012 I decided to get ‘serious’ and start training for a half marathon. However, two months later I broke my leg(in three places and tore five ligaments and tendons) halting training completely. Since ‘recovery’ I have lost about 80 pounds, and I am still going strong. In the total 6 years since that first ‘wake up call’ I have lost 140 pounds total. However, the last 80 ish have been in the last year and a half, and I am now more motivated than ever to lose these last 90 ish pounds!

DID YOU HAVE ANY NON-SCALE VICTORIES?  I’m thankful to have known from the very beginning that not every victory would be found on the scale. I overcame being told I’d never run again, to completing my first half marathon this past January. I am down 10 pant sizes since I first started, but most importantly I am happy with myself, my body, and where I am mentally. Being able to wake up and say “I feel strong today” is something I want for every person out there struggling with their weight, or mental image of themselves.

WHAT DOES YOUR DAILY DIET LOOK LIKE COMPARED TO WHEN YOU WERE HEAVIER?  Before I started this journey I ate out a lot. Like, ALL the friggin time, and then I was washing that fast food down with alcoholic beverages. Looking back, everything I did revolved around food, or drinking. My diet now, seems to always be under observation, and re evaluation. However, I try to not eat out as much, and I eat a lot of chicken, fish, and veggies. We also grill A LOT, instead of frying foods- which was one of my go to options the few times I would cook at home.

HOW DOES YOUR PHYSICAL ACTIVITY COMPARE TO WHEN YOU WERE HEAVIER?  The most active I was at my largest was to and from the car to hit a drive thru, or a walk to the fridge. During work hours, I had pretty much banked on the fact that I was never alone, so I had the ability to take breaks when walking, or getting around. Compare that to where I am now, and it is like night and day. I struggle now with taking an “off” day. I live for that sore “oh my gosh my legs” feeling that you get after a kick ass workout. However, I am working on listening to my body, and allowing recovery time!