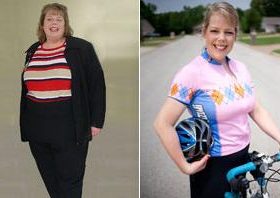 Weight Loss Before and After: Deborah Says Hello To A Size 6 And Goodbye To 170 Pounds

I started developing a weight problem around 10 years old. The onset of puberty started a weight gain. I can remember wearing a size 14 in the 5th grade.

HOW DID YOUR WEIGHT AFFECT ANY ASPECT(S) OF YOUR LIFE?  I have always been tall, 6’1″, but adding in being obese made it very difficult to find clothes. I wore a lot of mens clothing for length and size. Talls in all sizes are pretty available at a lot of places now, but not when I was younger.

WHAT WAS THE “TURNING POINT” THAT GOT YOU STARTED ON YOUR WEIGHT LOSS JOURNEY?  When I was 20 my parents agreed to help me get laser hair removal for some embarrassing hair, I was ecstatic! We went to a doctor’s office for a consult, this doctor also did laser hair removal, and the doctor looked at my hair and said he totally could get rid of it but told me I needed to see an endocrinologist. He explained that there is a reason I was growing hair like a man and that with my size it would seem like I could have PCOS. I left that appointment completely defeated and the thought that I might never have a child of my own… It was a HUGE blow at the age of 20. I went and saw an endocrinologist and sure enough I was diagnosed with PCOS. Back then I knew I was so big I quit weighing myself. I don’t think I ever hit 300 pounds, but I KNOW I was darn near close. I felt like a prisoner in my body. The PCOS was screwing up things and I had no control, I had resigned myself to the fact that I was just always going to be fat. But my wedding helped me work for it and then after gaining some back and adopting my son, it just clicked. Eat better.

HOW DID YOU GET STARTED?  After my diagnoses I was put on the pill and I lost a good 60 lbs by the time I graduated from college, and in that time I also met my husband. We had a short courtship and were married 1 year and 8 months after meeting, so that helped me lose a bunch of weight and I was down about 100 lbs by the time we got married.

HOW LONG AFTER YOU STARTED DID YOU BEGIN TO SEE RESULTS OF YOUR WEIGHT LOSS EFFORTS?  Even though I lost 100 pounds I put back on about 40 after marriage and fertility, and then it wasn’t until after we adopted our son that I really started to lose and stay that way. It’s been a 12 year journey.

WHAT WAS THE HARDEST PART?  After being married in 2005 we started to try and have a family in 2007 and I was switched from the pill to Metformin. After a year of trying we did more tests and found out that it was both me and my husband who were infertile, the perfect storm. We decided to do insemination and with the drugs and depression that came along with that I got back up to 230 lbs. After months of failed attempts there we decided to adopt a child from Korea. I lost 10 lbs before we finally did adopt, and at that time I was even exercising daily but eating horribly.

DID YOU EVER WANT TO GIVE UP? WHAT KEPT YOU GOING?  I did give up a bunch of times and what finally got me in gear was my child. He made made me want to be me and I think finally not being angry with my body is what got me over that hump. We brought him home in September of 2011 and by Thanksgiving I was down 20 lbs.

DID YOU HIT ANY WEIGHT LOSS PLATEAUS? HOW DID YOU OVERCOME THEM?  I definitely have hit plateaus but I have just changed up my eating a little and started trying other workouts. I have incorporated more weights and strength and that helped me a lot.

HOW LONG DID IT TAKE YOU TO LOSE MOST OF THE WEIGHT?  As I mentioned, my journey has been over the course of 12 years. I was finally down to the 170s by the fall of 2012. I had stayed around 178 for the past few years and I was okay with that but I still want more and more recently with incorporating running I am down to 173.

DID YOU HAVE ANY NON-SCALE VICTORIES?  I have had non-scale victories like being able to purchase mediums!

WHAT DOES YOUR DAILY DIET LOOK LIKE COMPARED TO WHEN YOU WERE HEAVIER?  Now I eat a lot less and it’s high protein, good fats, low carb, lots of veggies and some fruit. I am also trying to incorporate a vegetarian diet where I can. I still love my meats though. I did meet with a dietitian some years ago to discuss what I should and should not be eating because insulin resistance is something that came along with my PCOS. So I did have some guidance.

HOW DOES YOUR PHYSICAL ACTIVITY COMPARE TO WHEN YOU WERE HEAVIER?  I am much more active, I like to be on the go. Sitting around is the worst to me. When I was heavy I sat around and watched a lot of TV.