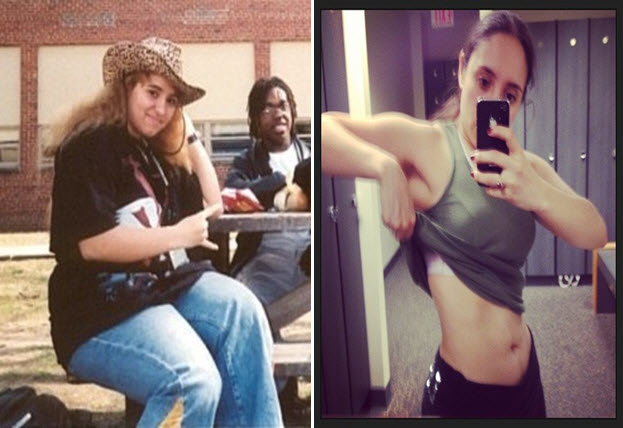 I was 19 years old when my boyfriend said to me, “You know, you’d look better if you lost weight.”
I thought to myself, NO FREAKING DUH. He was the tall, blonde, skinny type of guy who had no idea what it was like to be a short, Latina, chubby teenage girl.He didn’t know that, like most girls, I thought about my weight every hour of every day. I hated shopping because I couldn’t buy all the cute clothes that girls my age were shopping for; none of them were in my size. I shopped in the “missus” section of Macy’s and felt like an old lady at 19, trying to fit into “mom jeans”, thinking that crying in the dressing room was totally normal and how I was supposed to live. I was 5’ tall and 180lbs, but I didn’t think of myself as unhealthy. I played soccer on my high school team, I was on a swim team for most of my childhood summers, and my high school was set in such a way that we would walk the length of a football field at least four times a day.
All that being said, I wasn’t eating right. Not that the way I ate was any different from anyone else I knew. We all ate the same junk food from convenience stores, from fast food places, and from our parents. We didn’t really know better. Going out to eat was a family thing, a celebratory thing. Doughnuts on Saturdays before games or swim meets were normal. “I’m just made to be bigger”, I thought to myself. Half of my friends were skinny, and made meals out of pizza and burgers on a daily basis. “I’m just built this way,” I said to myself.
Until the boyfriend thing. He was so thin and athletic, I felt lucky to have found someone so attractive that would date someone like me. When my tall prince charming boyfriend said I should try to lose weight, I thought I was obligated to try. But how? “My mom is on Atkins, she says it works.”
I went online. It seemed easy enough, and my mom was happy letting me change my eating style if it meant more vegetables. So I tried it, and after a lifetime of meals that involved rice, pasta and bread, I very quickly dropped thirty pounds in less than four months. Though it was difficult to explain to my family that I couldn’t eat tortillas or plantains for a while, they were supportive of my goals. My exercise involved a series of belly dancing workout tapes I bought at the mall, which I’d practice to in my room every night. I cut all soda and juice from my diet and drank nothing but water and unsweetened tea. My meals became about 75% vegetable and 25% protein. I had to learn to cook for myself, and actually came to the realization that cooking this way was way easier than I imagined.
A year later, I was down to 130lbs. This was the weight I always imagined myself to be, when I was at my heaviest. None of my clothes fit. I had a 27” waist and discovered that underneath all of the extra weight I was carrying, I had an hourglass figure. I might never be the skinny Barbie-doll figure I had in mind, but neither would I allow myself to fall into bad habits that would make me think less of myself. I finally could shop in the “normal” sections of the stores, though it never became any less surprising to find myself looking for clothes marked “medium”. When you grow up XL, going backwards is a shock you sometimes never recover from. But here I was, in college, feeling healthier and happier than I ever had in my entire life, with the realization that I had the power to do whatever I put my mind to.
It probably won’t surprise anyone that I broke up with the boyfriend.

RELATED:   Weight Loss Before and After: Jaime Dropped 60 By Using Exercise As Her Therapy

These days, I do a lot more than belly dance. I work out in the gym, my low carb diet has become a way of life, and not only has my weight improved but so has my stamina. I’m a heavy metal vocalist, and my dream now is to be able to run around the stage with the energy of Bruce Dickinson until I’m too old to scream. Until then, heavy metal is my life, and the demons associated with my weight are the enemy I will never let conquer my brain ever again.

RELATED:   My 142 Pound Weight Loss Journey with PCOS: From Struggle to Success