​Weight Loss Before and After: I Fought My Eating Disorder And Lost 150 Pounds 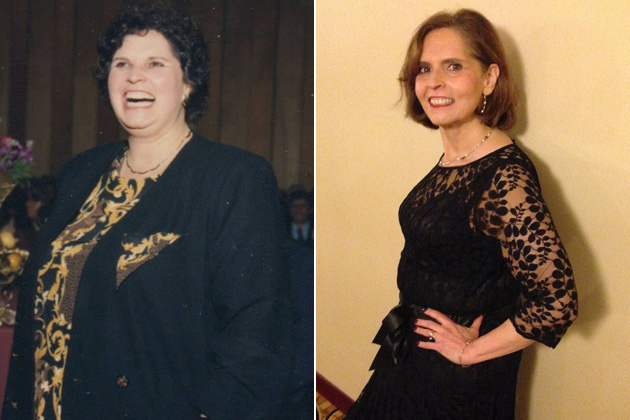 M​ost of my life, I suffered from Binge-Eating Disorder (BED), in which I consumed​ large amounts of food in a very short time. My typical binge foods were carbohydrates such as cake, cookies, ice cream, pasta, and bread. In the absence of those foods, I could also finish off bags of chips or pretzels. The reason I ate so many calories in such a short time was because I was a very emotional person and I didn’t know how to deal with my intense feelings. I ate to numb the intensity and to submerge the feelings so I could carry on with my activities. Sometimes it backfired and I would get a temporary high from the sugar and then become exhausted and have to sleep. Either way, I continued to gain weight, and ended up filling myself up not only on food but on self-loathing. In between binges, I was a highly successful overachiever even as I reached 300 pounds.

For me, there​ wasn’t one moment in time that was a turning point​. It was a series of moments over days, weeks, years. I wanted to lose weight so badly and I tried everything I could to get thin. I knew in every cell of my body (and there were many!) that I wanted to lose weight and I was determined to reach that goal. There were key turning points in which my “aha” moments were significant milestones: learning how to ask for help, not fitting into the belt on the roller coaster with my kids, seeing a friend lose 155 pounds, having to forego an epidural when I gave birth because the hospital didn’t have a long enough needle, and realizing that I was eating particular foods because I thought they would fill deep holes in my soul and they only made the holes bigger.

It would be nice to say there was one magic bullet responsible for my 15​0 pound weight loss but, in fact, there were a series of interventions. After close to 30 years of different therapies to uncover why I ate, I realized that in addition to the emotional issues, I was also a food addict, and I had to deal with my underlying addiction if I wanted to keep off ​the weight. I began to see how I was similar to an alcoholic and that my recovery paralleled theirs as I had to learn to put down the sugar and cope with life without a crutch that only gave momentary relief. So I pursued my goals from emotional and spiritual angles, as well as medical interventions which were clearly not sufficient to bring about permanent change.I refused to regain the weight I had worked so hard to lose. I created a daily regimen of starting the day in prayer and meditation, eating healthy foods that don’t trigger me to binge, reaching out to friends rather than reaching for the food, and living a life of service to others so I don’t get too caught up in myself, my ego, and my grandiosity. All those things typically ​lead me right back to the refrigerator.

The biggest bonus of life in addition to losing almost half my weight, is that I’m extraordinarily happy, I have fulfilling relationships, and I don’t hate my body. That last one, in particular, is a miracle because I never thought I would accept my body as it is! I spent so many years trying to cover up this part of me or that part of me or in trying to be so charismatic or so dazzling that people wouldn’t notice how fat I was. I don’t do that anymore. I’ve learned to accept my wide hips and big derriere as just part of me, and I dance with fervor and joy shaking every part of my body. In relationships, I used to have such a fear of rejection, that I would drop people before they dropped me. I lost some wonderful friends that way but I was so afraid of being ostracized because of my weight, that I wanted to be in control of every relationship. I have evolved to the point where I can trust that some people really do love me and will stick by me, and the ones that don’t… well, it’s fine. Not everyone has to like me and certain relationships are not meant to be. That gives me great freedom in being myself with people and not trying to hide behind multiple layers. I have also become much more spiritual. By having a spiritual practice, I have come to see that every action I have taken until now, every diet I “flunked”, every mistake I made, and every dysfunctional behavior and relationship, has been responsible for bringing me to this moment. And this moment is awesome.